Throughout my horology journey down the Seiko rabbit hole, there were a few significant milestones. For example, my initial fascination with the Seiko 4S collection, followed by the Seiko Brightz range, which were previously powered by the Seiko 4S and mostly in Brightz titanium alloy, then it led me to the Credor range which is powered by both the top of the line 4S and 8L movements, then I made a brief and significant digression to the 6S chronograph, which is basically from the same family as the Grand Seiko 9S movements. From there, I made a quick detour to visit the Citizen side of the pond, and then I made numerous other vintage Seiko purchases, and also some contemporary Seiko purchases with the 7S and 6R movements. The topic of today’s article is focused on the vintage Seiko purchases which I find to be incredible value for money for the complication that it is offering.

I first got to understand the beauty of complications with my first very complicated Seiko the 4S36 SARN001, which was and still very likely the most complicated Seiko every manufactured past and present, including a power reserve indicator, retrograde day, date, and an independently adjustable GMT hand. 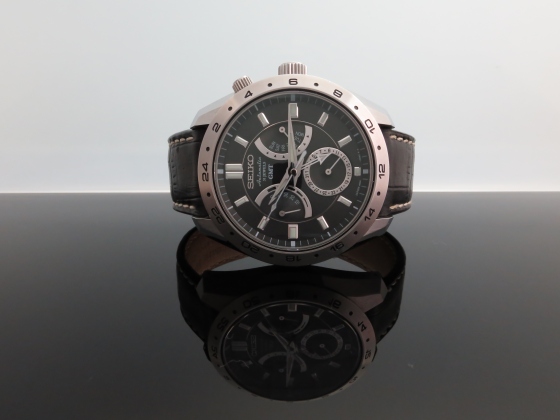 A complication in horology terms, is simply an additional piece of information presented by the watch. Hence the seconds hands is considered a complication, because it presents the watch owner with the knowledge of the seconds position at any point in time, while a tourbillion, albeit being extremely difficult to manufacture and implement, is not considered a complication, simply because it does not provide any additional piece of information.

The Bell-Matic in any form is the ONLY mechanical alarm watch produced by Seiko throughout its entire history and is a very interesting complication in my point of view. The fact that an alarm created solely from moving metallic parts, driven by the unwinding of a coiled spring draws out a childish but unadulterated form of joy from me whenever I hear it. This is coming from someone born as a millennial whose only experience of an alarm was the electric school bell from my early schooling days or the indistinct electronic beeping generated from my Casio/Timex watch in my teenage years up until my graduation. This was of course gradually replaced with all forms of fancy tunes or songs with the mass adoption of mobile phones, which had all but made mechanical objects a memory of the past. 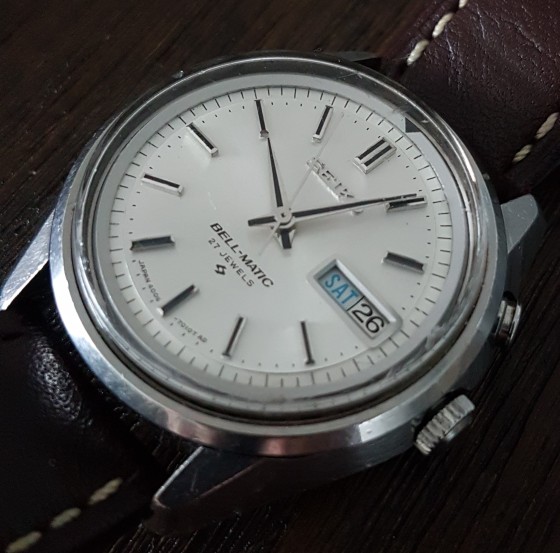 So after having been distracted by various vintage Seikos such as the King Seikos, 6138/9 chronographs, Goldfeather, Lord Marvels, the time was finally ripe for me to hunt for a Bell Matic.

I was well aware that the Bell Matic came in various disguises in the form of jewel counts, such as the early 27 jewels variant, or the super rare US only 21 jewels variant and the latter , more common 17 jewels variant. Rumors had it that the jewel count was gradually reduced from 27 to 17 jewels due to tariffs imposed by US, with the 21 jewel variant only being available in the US. Otherwise, the Bell Matics were produced from 1967 to 1978. The models produced from the early onset apparently came with 7 digits serial number on the case back and had the “Water Proof” designation. This was disallowed some time in 1970, and the Bell Matics then came with the “Water Resist” designation instead. 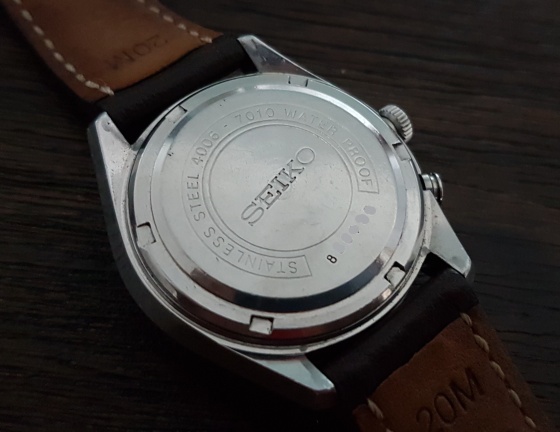 My example here was produced in 1968 and had the newer 6 digit serial number, but still retained the “Water Proof” designation. Very nice indeed.

Since we are at the case back already, lets proceed to see some pictures of the fairly clean but complicated movement. 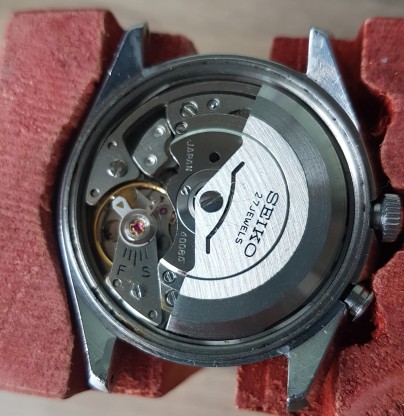 I won’t attempt to pretend to be able to detail the interesting parts of the movements, but I do know that this is probably the only Seiko with 2 springs, one for the usual time-keeping function and the other solely for the alarm. We can’t have the time keeping stop just because the alarm has used up all the stored potential energy can we?

Also I would like to bring to the reader’s attention that “Japan” is stamped proudly on the movement bridge of a fairly accessible Seiko when it was released, unlike the modern Seikos of today.

Moving on to the dial side, we can see that we have a full featured dial here, with a 3 hander and day/date in its own nicely framed window. In line with the designs of classic Seikos, we have a single bar, with a black line in the middle for the hour markers, while the 12 o’clock marker is a double bar.

Note that there is another sub-sub branding called the “Business Bell” which is likely to be a more subtle, dressier sub genre of the Bell-Matics, some of which can get into really funky colours and case designs. 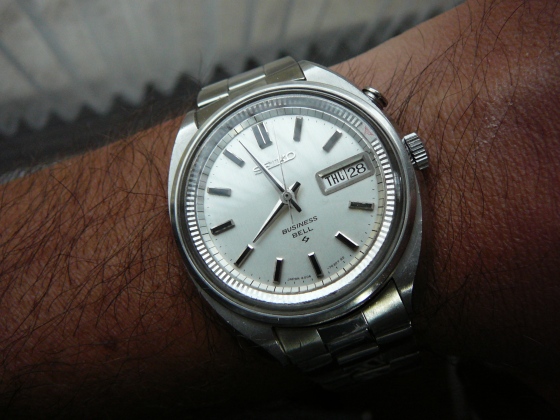 The hands are likely to be the same handset used in the more expensive KS and GS of the same era being of the dauphine design with a black racing strip in the middle to aid visibility. Interestingly though, the seconds hands are fairly short and do not reach the seconds markers. 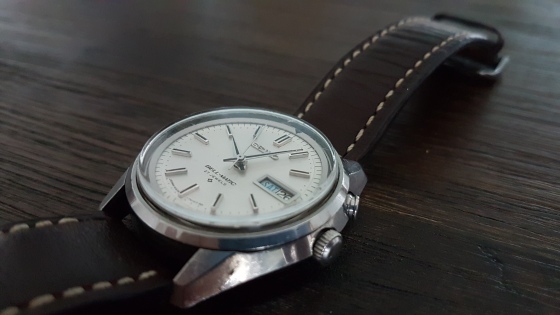 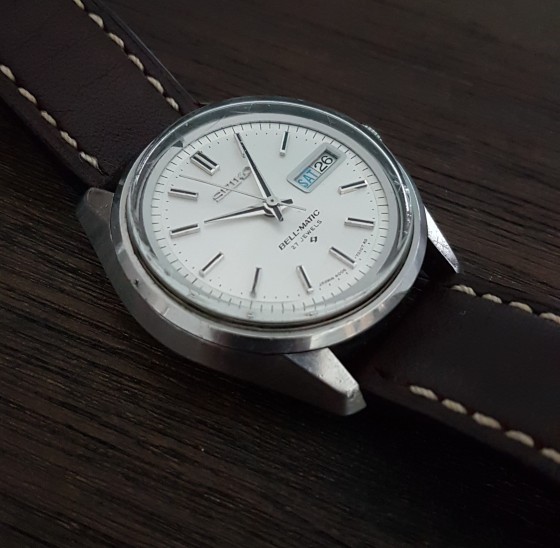 From the photo below, one can also clearly see the high box mineral crystal. 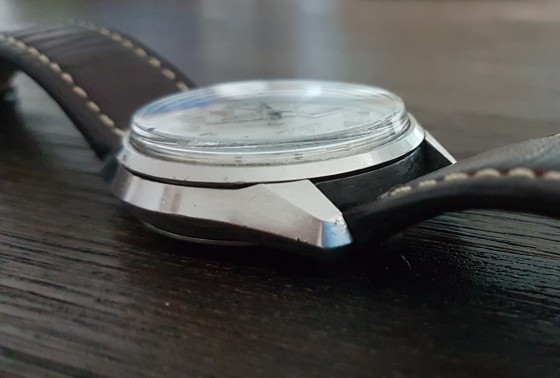 This photo above shows nicely the sculptured lugs of the 7010 case design which is one of my favourite because it is very similar to that of the MM300, with a clear delineation of the planes on the sides of the case. 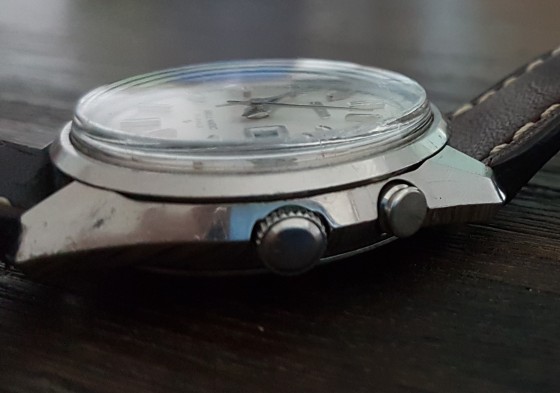 On the other side of the case we have the dual crowns of the Bell-Matic. The main, time setting crown is at the 3 o’clock position and comes with grooves for easy winding up of the alarm spring in the neutral position. The time keeping mainspring can only be wound via the rotor.

The secondary crown comes with a lid for ease of pulling it out in order to activate the alarm.

I’ll explain the multiple uses of the dual crowns in more details below. 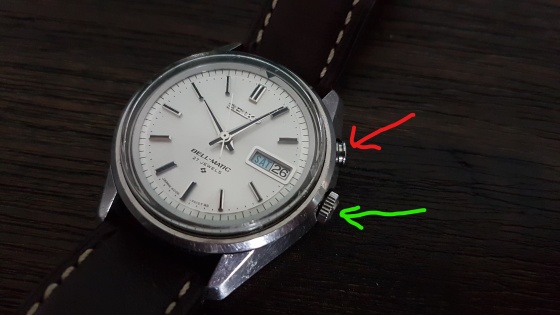 I would like to explain quickly here how to operate the alarm function as I had a lot of issues when I first receive this watch in the mail and I had to comb through plenty of YouTube videos before I could operate it.

The red arrow points to the alarm button/ date quick set button. Depressing the button allows the wearer to quick set the date only (day is non quick set). In the neutral position, the wearer can then wind up the alarm spring via the main crown (green arrow) as the alarm is not activated/silenced. In the first click position, the alarm is poised to ring at the time indicated by black arrow marked out on the internal bezel.

The green arrows points to the winding/time setting/alarm setting crown. In the neutral position, assuming that the alarm is silenced, the crown can be used to wind the alarm spring. In the first click, turning the crown will rotate the internal bezel, and the black arrow will then point to whenever time the wear wants the alarm to sound. In the second click position, this allows the wearer to do normal time keeping adjustment, without hacking.

Overall, I really like this Seiko as the case design is unique to Seiko and the silver dial makes it appropriate for work. Plus the fact that this is Seiko’s only mechanical alarm movement, makes it all the more appealing to me. Unlike some of the Kinetic designs, the secondary crown is not too much of an eye sore to me. Overall, its a great beater watch for me, and the alarm function will prove useful while travelling.