As a followup to my previous article on the Seiko Historical Collection the Year 2000, this post will be a review on 1 of the magnificent 7 watches  – King Seiko SCVN001.

“Seiko brand watches were originally produced by two different Seiko Corp. subsidiaries. One was Daini Seikosha Co, Ltd (Kameido,Koto-ku, Tokyo) and the other was Suwa Seikosha Co (Suwa-shi, Nagano). Two different companies produced one brand in order to improve technology through severe competition and to hedge the risk. Splendid watches were produced at both companies because of this tough competition and this system proved efficient at hedging the risk. If either company experienced production problems the other company could compensate by increasing production. Eventually Daini Seikosha Co, Ltd. changed its company name to Seiko Instruments Inc. and Suwa Seikosha Co, to Seiko Epson Corporation.”

The Seiko Brightz and Ananta range available today can be imagined to be the modern equivalent of the King Seiko. However it is important to note that during the 1960s/1970s, Suwa and Daini were rival companies. Hence, both Grand Seiko and the King Seiko were the pinnacles of the 2 Seiko companies available to the public at that time.

Although the Grand Seiko was officially resurrected in 1998, the same cannot be said for the King Seiko. To me, it seems to confirm that the Grand Seiko and King Seiko were probably much closer competitors in the 60s and 70s than originally given credit for. As such, it will only make sense to offer consumers 1 premium product, rather than 2 of the equivalent quality.

Nevertheless the King Seiko namesake did see at least 1 revival in 2000, as part of the Seiko Historical Collection of the Year 2000, whereas the Grand Seiko did not form part of the collection. 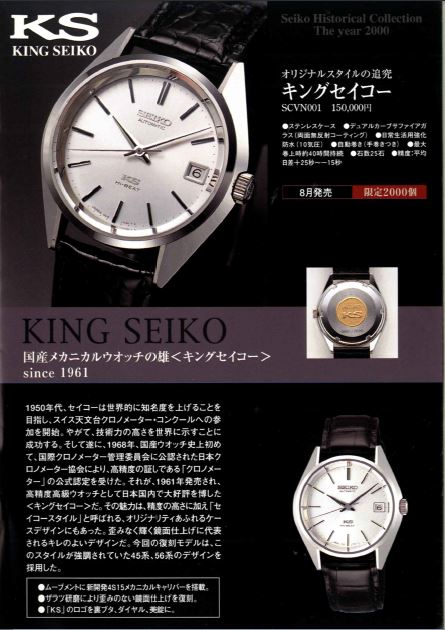 Although the vintage Grand Seikos are generally acknowledged to be of a slightly higher quality than the vintage King Seikos, at least 1 King Seiko is thought to be on par or even exceeding the quality of a Grand Seiko by Seiya. This was the 52 King Seiko, equipped with the fabulous Cal 52, which later formed the basis for the 4s family of movements. 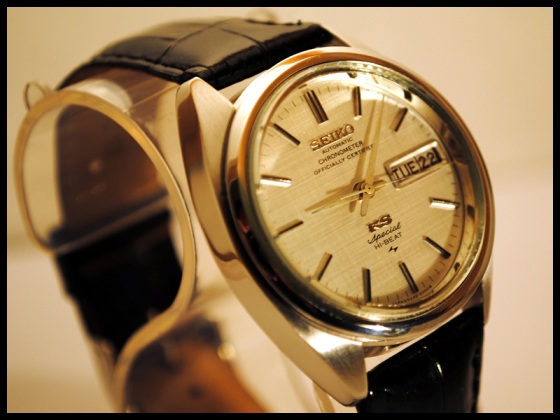 The SCVN001 is a very significant watch for the below mentioned reasons:

2) Follows faithfully the Grammar of Design philosophy that was also followed by the vintage GS and KS. The only other modern examples being the recent 44GS released in 2013.

3) Uses the same movement as the vintage piece that it is based on. [Editor: To be clear, the watch case that SCVN001 is based upon contains the 56 movement and not the 52 movement. As such, my above statement is, strictly speaking, incorrect. The SCVN001 is a mash of vintage KS, with the case from the 56KS and the movement from the 52KS.]

I cannot help but emphasize how important the last point about the movement is. Many brands reissue watches based on their most popular designs from the past. However, many of these might look similar to their vintage counterparts, but the heart of the watch would frequently be using an updated modern movement. After all, how many movements are still in use today since their first introduction so many decades ago?  A few examples that I can think of are the Zenith El Primero, Valjoux 7750, ETA 2824, etc.

Therefore I find it very fitting that the King Seiko SCVN001 is fitted with a 4S15 movement, which is basically a modern copy of the Seiko 52 movement, one of the last to power a vintage King Seiko and widely considered as one of the very best movements Seiko has to offer, past and present.

In 1959, Seiko hired a design graduate by the name of Taro Tanaka. One day in 1962 while at Wako, Taro observed that the Swiss watches caught and reflected the lights in the store much better than Seikos. Upon further examination, he realized that the Swiss watch cases consists of perfectly flat and conical surfaces perfectly smooth and free from distortions. He then created a “design formula ” which became known as Seiko’s “Grammar of Design”. 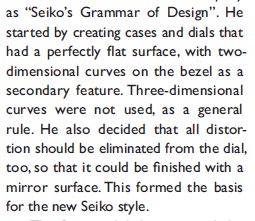 This is perfectly reflected in the case of the SCVN001. The lugs are perfectly flat and polished, with only the circular bezel breaking the symmetry of the flat planes.

The bezel is reversed cut, similar to the SARN001 and GS GMT SBGM001. This has the effect of making the bezel and watch dial look like it is a separate piece from the rest of the case cradle,  similar to the early Anantas. However this is not true. Other than the case back, the rest of the body are machined from a single piece of steel. [Editor: This is incorrect and the bezel/crystal retaining ring is indeed a separate piece of metal, and not part of the watch case itself.]

The crown is nicely signed “KS” similar to its vintage counterpart. The etching is also deep and will not wear off easily. The letters themselves are polished against an unfinished backdrop which helps the letters to really pop when it catches light at the right angles.

In this shot you can also clearly see the reflection of the crown in the side of the case. This shows the phenomenal polishing of the KS, which is really incredible at its price point.

The lugs and sides of the SCVN001 case are also fully polished, which is in line with the appearance of standard vintage KS. It had been noted that one feature of the “KS Special” was that the underside of the case was left unpolished, in order to provide a greater contrast to the polished surfaces. Given that the SCVN is powered by the run of the mill 4S15 (+25/-15s a day) rather than the higher spec-ed 4S35 (+15/-10s a day), this finishing is perhaps more in line with the KS finishing of old as well. 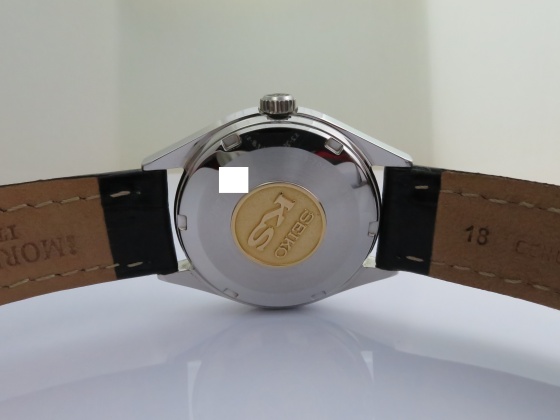 It would also have been great if it was a monobloc case (where there is no case back and the movement can only be accessed after taking out the front crystal and dial face), similar to its predecessors from the first 2 generations as shown in the preceding picture, however for servicing reasons, I assume a case back would make it a lot easier for watch technicians.

The dial of the KS is very faithful to the vintage KS, with the only exception being the markers on the left and right side of the 6 o’clock marker, printing the new caliber used and the case design.

Polished single batons with a black middle portion are used for all the hour markers, with the exception being the 12 o’clock marker which is a double baton and the 3 o’clock which is replaced by a framed date window.

The flange ring around the periphery of the dial is also highly polished, which is not something you see in modern watches today. In the picture above, you can see the hour batons being reflected in the flange ring.

The hour and minute hands are designed in the same manner as the hour batons, being highly polished with a black center. The seconds hands is without the black center. All the hands and hour markers are not lumed. This is in line with the vintage KS watches and in keeping up with its appearance of being a dress watch. Despite not having any lume, it is very easy to tell the time in low light conditions given the highly reflective hands and hour markers, with contrasting black center lines.

The “Seiko” and “KS” logos are applied, similar to the vintage KS, with the words “Automatic” and “Hi-Beat” printed on the dial below the 2 logos respectively. In the 60s and 70s, Hi-Beat refer to watches beating at 8 bps, as 6 bps and slower were common in those days. Today, 8bps is the new norm, and “hi-beat” would refer to the 10bps and faster movements, mainly offered by Seiko and Zenith.

The Daini logo is missing in the SCVN001, compared to the vintage 52 KS. It would have been a nice nostalgic touch if present. 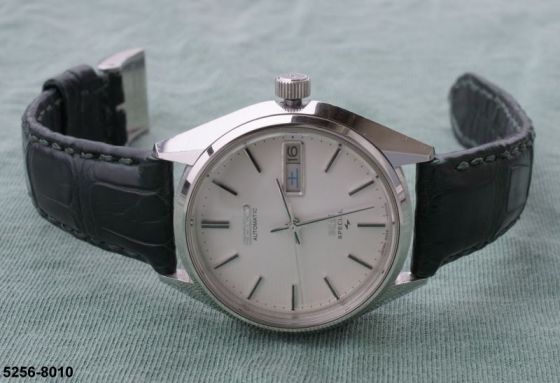 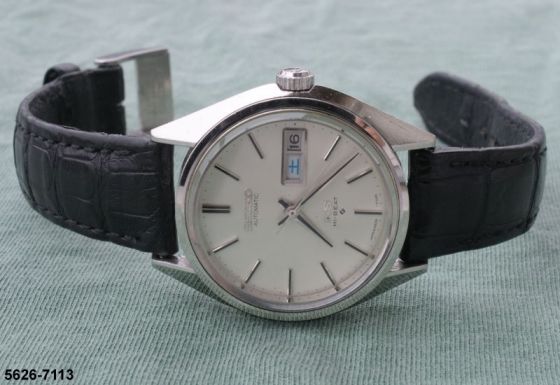 Also please note that Suwa also produced KS watches, being the 56KS. Daini produced the 52KS. This is 1 way to tell which movement is found in your KS.

The movement is the 4S15 movement as I have mentioned earlier and regular visitors will know my fascination and appreciation of this little caliber.

“All 4S feature Hi-Beat 28’800 A/h movement, with integrated auto-winding–thinner in profile compared to a modular system, and allows the case to be made thinner. Thermo-compensating balance and hair-spring come standard with the base caliber, while the higher beat rate (for Seiko) allows it to be adjusted to higher tolerance. The movement also hacks and hand-winds. The 4S35 is best compared to the ETA 2892 in Top execution, and if it were Swiss, would likely be considered a Tracteur. Both ETA 2892 and Seiko 4S were not made to be, but rather, born chronometers.”

Seiko could have done better by equipping the SCVN001 with a 4S35 movement, which is better regulated than the 4S15, however for some reason 4S35 equipped watches were only found in the early to mid 90s.

This is an amazing and significant watch, especially so given my utmost preference for the 4S movements compared to the 6R/4R/7S movements found in mid-range Seikos these days. I have been exceptionally lucky to have one in NOS condition given how rare these watches pop up in the market these days.

To conclude this post, I would like to share photos of another KS which was in my possession for a while and is now in the loving possession of a good friend. This is a rare 56KS Chronometer certified model. Very nice and different hands from the usual KS hands. 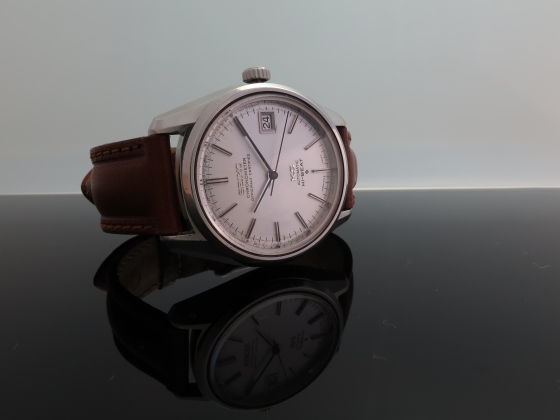 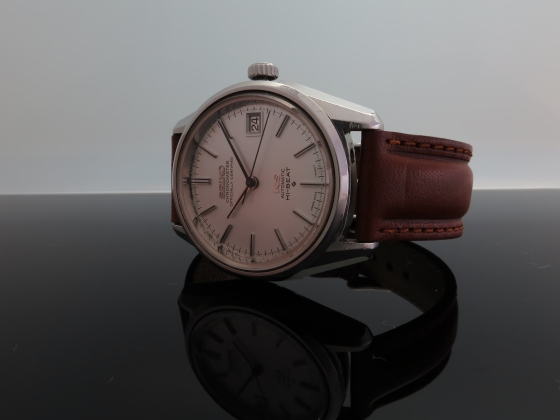 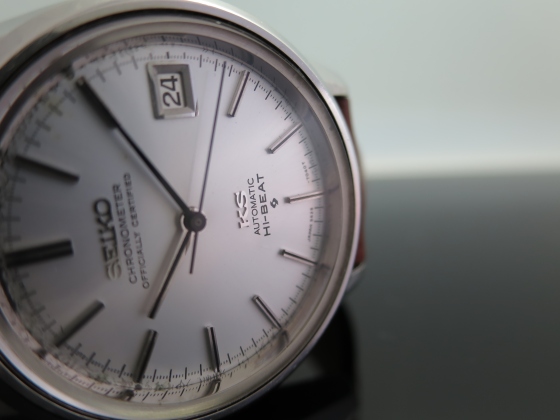 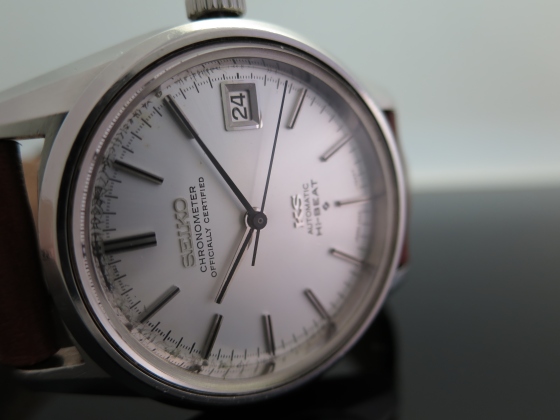 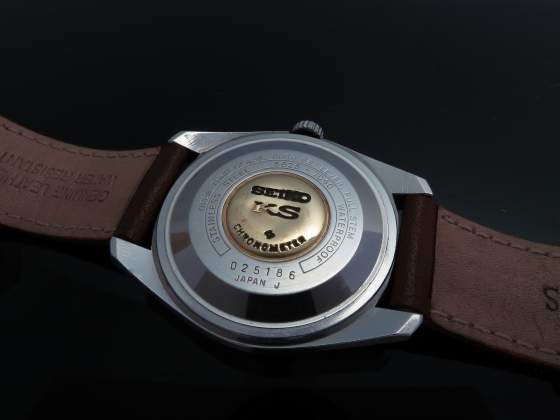 History of KS and comparison between 56 KS and 52 KS – http://www.thewatchsite.com/16-seiko-reviews/111082-history-classic-automatic-king-seiko-previously-posted-watchuseek.html#/forumsite/20630/topics/111082