In the legendary stable of Japanese divers, there lies a god.

1 of the 12 members of the Olympian deities of the Pantheon in Greek mythology, Poseidon is aptly known as the God of the Sea. Brother of Zeus and Hades, Atlantis is his chosen domain.

Just like her namesake, the Orient Poseidon is as mythical as it comes. Born not in Japan, but in Brazil, this watch is a match for the Seiko Marine Master 300m and Orient’s very own saturation 300m diver, while costing less than half as much. Catching sight of an Orient Poseidon outside of Brazil is like locating the lost Atlantis (assuming it exists).

Unlike Atlantis, the Orient Poseidon indeed exists as I first got to know about her through Yeoman‘s blog way back in 2010. I got reacquainted with her recently as my friend loaned her to me for a quick photo review.

The watch is a massive 45mm with a very unique design all of its own, sporting a cool Rolex-ish coke bezel, hex screws and integrated rubber strap. The watch is polished all around, but the monotony is broken by the hex screws found on all four corners ot the case. One of the hex screws on the non-crown side is marked “HE” which presumably refers the helium release value. This is different from the OS 300m and MM300m which do not need a helium release value due to their unique L shape gasket and case design.

Orient Poseidon – My camera is reflected in its polished lug

The diver comes with a day-date complication, however unlike your typical cal 469 equipped watches, it does not have a quick set day pusher usually found at the 2 o’clock position. However, I understand from the owner that we simply need to set the time back and forth between 12 am to change the date, although I not sure how we can change the day.

The movement is a non handwinding, non hacking basic movement found in the Orient line. Power reserve is around 40 hours, beating at 21,600 bph. This is nothing fancy compared to what Orient Star and Royal Orient offers these days and can only be compared to the 7S Seiko movements. However, it suffices for its use in a budget professional diver.

In comparison, the Autozilla from Citizen, which costs much much more, is also using a basic Miyota 82 series movement, which has similar specs to the Orient cal 469. 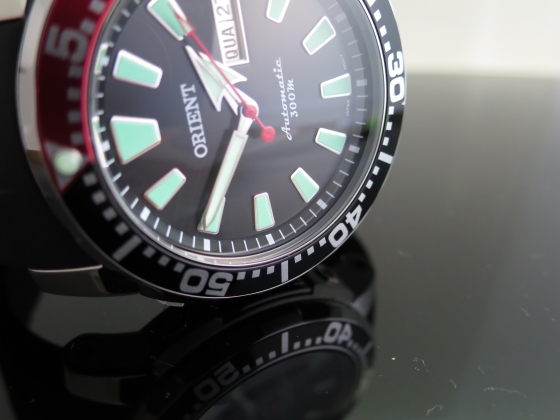 Like most divers, Poseidon uses block hour markers to maximise the simplicity and hence readability of the dial. Using block markers also allows the maximum application of lume onto the markers itself. The markers also appears to be applied and each border is surrounded by a silver trim, which helps it to reflect any ambient light.

Text is kept to a minimum on the dial, having simply the “Orient” wording at 12 o’clock without the fancy lion symbol that Orient sometimes uses.

The words “Automatic” and “300m” completes the dial at the 6 o’clock position. In my honest opinion, the Orient Poseidon would have pulled off a higher quality look if applied logos were used instead of having the text printed on the dial .

Sadly the symmetry of the dial is broken up by the day and date cut-outs at the 3 o’clock marker, which are also bordered by silver trim. Being a Brazilian Domestic Model (BDM), the day wheel is in English and Brazilian on a generic white background. I would have very much preferred a no date/day variant or at most a date cut out hidden at the 4 o’clock position or even integrated into the 6 o’clock marker.

However, I suppose the market dictated the need for a day/date complication, and so Orient delivered.

Many people would comment that the hands of the Orient Poseidon are similar to that of the Seiko Monsters, however I beg to differ. They are much closer to that of the Shogun and are obviously made of better material than the plastic hands that the Monsters come with.

The hour hands has a line down the middle and helps to add depth to the hands. Similar to the hour markers, the hour and minute hands are certainly filled with lume, while bordered in silver trim which helps to reflect the light in dark settings. They are completed by a red seconds hand with a lume spot at the tip.

The pip at the 12 o’clock position of the bezel is protruding. This is a poor design flaw as it provides plenty of opportunities for the owner to bang the pip against a hard surface and simply lose the pip. I have no idea how secure the pip is to the bezel, but I would have very much preferred the pip to be flush against the bezel.

The Poseidon has a very nice crown with the Orient stylised “O” in relief. However the crown does not have very well defined cut outs and feels smooth all round, much like the rest of the case, which I will touch on more later.

As you can see here, the hex screws on the sides of the case echos the designs of the lug screws as well. The Poseidon comes with a special tool for you to unscrew the lugs in order to switch out the bracelet/rubber straps. As mentioned earlier, one of these hex screws on the non-crown side also acts as the helium release value and is marked “HE”. 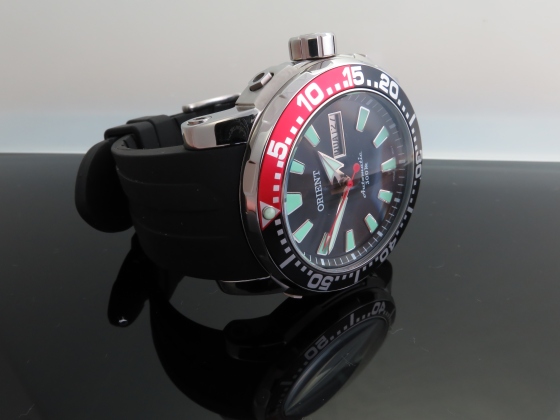 Unlike higher priced divers like the Shogun, the case of the Poseidon feels overly simple in terms of the finishing being mainly polished all around. Also, the edges of the cases do not appear to be crisp nor angular, compared to the Shogun for example. The edges of the cases are not beveled in any way, but simply rounded.

This is likely due to the low cost of manufacturing, and most regular watch consumers would not have noticed the difference. However when it comes to watches, sometimes you do get what you pay for.

Lume as with the better Orient divers is bright and long lasting. However as you can see in the picture below, Poseidon appears to be using a different lume for their hands and pips as compared to the hour markers, which appear weaker.

The Poseidon is a rarely seen watch and was much sought after a couple of years back, however the allure of the Poseidon seem to have died down since then. However for a mere USD 500 or so, you will get one of the best built 300m dive watches on the market with its own unique case design, unlike many other dive watches that people frequently mistake for a Submariner.

One thought on “Orient Poseidon 300m Diver – God of the Seas”